So. The kouign amann (link takes you to the recipe I used).

I have been intrigued by this weird little pastry ever since I saw it show up as a technical challenge in the most recent season of Great British Bake Off. I’ve made lots of interesting baked things over the years and really enjoy it when I get to play in the kitchen with flour and butter and sugar and yeast. But I am also really just an amateur baker (much, of course, like the contestants on GBBO) and some things I have always been a little hesitant about trying. Laminated dough is one of those things (the dough that’s used in making items like croissants and kouign amann and other similar types of concotions). It always seemed so unbearable *fussy*, having to chill and fold and chill and fold and so on ad nauseum, and every time I have seen it discussed (usually on some sort of competition show), it comes across as the sort of thing that only a really experienced pastry chef would do.

But then I reminded myself that hey, self, you have built not one, but TWO crouquembouche (with homemade caramel strands, no less), and you made strudel dough from scratch not once, but TWICE, with the dough so thin that you could, quite literally, read *through* it, so what’s a little laminated dough among friends? How hard could it possibly be?

As it turns out, it wasn’t actually hard at all.

Okay, granted, making this kind of dough *is* fussy. There’s no getting around the fact that if you really want the classic flaky layers, you have to be willing to put in the effort and time. You *do* have to pay attention to the clock and be mindful of your measurements (my baking improved tremendously the day I started measuring by weight instead of by volume. A kitchen scale is the home baker’s very best friend), but if you follow the recipe, it’s really pretty simple. The dough is pretty straightforward – just flour and yeast and water and salt and little bit of melted butter to get things started. Then you let it rise for an hour and in the meantime you smash a giant hunk of butter into a square with your rolling pin, and wrap that up and stash it in the fridge. And then when the dough has risen, you roll it out, plunk the chilled butter square into the middle, fold it all up, give it a go with the rolling pin, and another fold, and pop it back into the fridge for a rest. Do that two more times (the fold and roll, not the addition of the butter – once is plenty of butter, trust me), and then one more time, except this time you sprinkle it liberally with sugar before you fold and roll, sprinkle liberally with sugar a second time, and then you cut it into squares, gather the corners, pop them into a muffin tin, let sit for a bit, bake, and poof – done. You have made kouign amann. 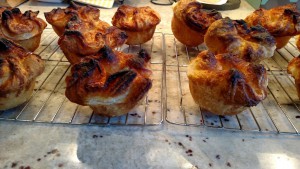 The tops of mine got just a hair over-browned – I was glad I thought to check them when I did, because if i’d left them in the full 40 minutes they would have been burnt – but otherwise, they turned out beautifully. Biting into one is a messy experience since the outer layers are delicate and tend to flake into bits as soon as your teeth hit them, but the inside is lovely and soft and buttery, with a little bit of caramelized sugar to sweeten things up. I freely admit to doing a fair bit of giddy squealing as I pulled one apart and saw actual layers in my dough. I was so worried I’d screw it up, but I didn’t- not at all! Bonus, they’re incredibly delicious (so much better than the ones I’ve bought from bakeries). This is a pastry I’ll definitely be making again.

Back to the knitting, now that we have gotten our pastry squeeing out of the way. To make up for the boring garter stitch square from yesterday, today’s pattern – Portcullis – uses 2 colors, and a wee bit of lace. 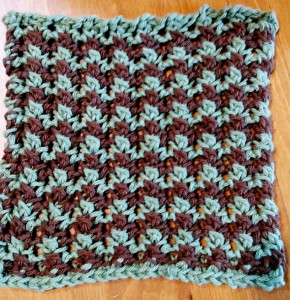 I am not quite sure how I feel about the color combination here. It looked better side by side in the skeins than it does when knit up. I suppose if I cared enough I could have ripped it out and picked something different. Clearly I did not.

« The shades of grey you were really looking for
Dishcloth-A-Day: Day Sixteen »

« The shades of grey you were really looking for
Dishcloth-A-Day: Day Sixteen »