More than the days of the year

I wrote yesterday’s entry first thing in the morning, before all the news erupted over the fact that we had yet *another* mass shooting. Oh wait, scratch that. TWO mass shootings.

And then let’s also toss in the news today that the party that waves their religion rabidly around in everyone’s face – a religion based on a guy who actually TOLD HIS FOLLOWERS to feed the hungry, clothe the naked, and heal the sick – voted once again to defund healthcare, further restrict a woman’s ability to get LEGAL medical procedures, cut Medicaid, and repeal the ACA; the same party that marches in lockstep with the NRA about how *obviously* the best way to prevent all those mass shootings is to get more guns on the street; the same party that overwhelmingly voted down yet another attempt to require more stringent background checks for gun purchases. Because heaven forbid a woman be able to get easy access to birth control, or a poor family be able to see a doctor without having to go into debt, but by golly, no one better stand in the way of any disaffected asshole buying up as much weaponry as they want so they can waltz into a crowded setting and mow a bunch of unsuspecting civilians to the ground. 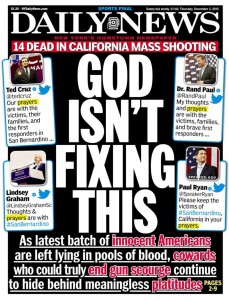 l of this is to say that I had something fun and whimsical to share for today’s internet thing, but shockingly, I don’t feel very fun or whimsical. So instead I shall point you to this most marvelous front page article of the New York Daily News (click image to get to article itself), which encompasses perfectly how I have felt every single time yet another domestic terrorist shoots up a shopping mall or a school or a <insert large public gathering spot here>, and the best that certain politicians have to offer is their prayers. And I will point you to the Igorvolsky twitter account. Since the news broke yesterday, he has been responding to all the hollow ‘pray for the victims’ posts from members of Congress by pointing out just how much support each person has received from the NRA.

« Where the wild things are
Atop »

« Where the wild things are
Atop »