Today is Random Act of Kindness Day, so I hope you all were nice to other people for no reason at all. But that’s not a food, or a thing that I can make (and an act of kindness done deliberately for a blog post doesn’t seem like it should count anyway).

Luckily, today is also National Indian Pudding Day, so hooray, we have a food thing to try.

I’ve heard of this thing before, but have never, as far as I can recall, tried it. A quick query to Google suggests that it’s called Indian Pudding because it’s made with cornmeal which was made from what they were calling, at the time, Indian corn, and that the colonists who came over to America used that because that’s what was available, to make foods similar to what they were used to eating back in Britain, and not because it is a food made by Native Americans. It’s still a bit of an uncomfortable name, but I didn’t find any good alternatives out there, so….Pudding-With-Inappropriate-Name, it is!

Anyway. The recipe seemed fairly straightforward. You start by boiling 3 cups of milk, and then whisking in a *very* small amount of cornmeal until it’s thick. Then you stir in ginger and cinnamon and various sweeteners (the recipe I used called for both molasses and maple syrup). There was a small part of me that enjoyed the fact that I was making this using only ingredients that the colonists might have had on hand (okay, I don’t know if that’s accurate when it comes to the spices, but the rest of the stuff works). Next you pour it into a baking dish and you stick it into the oven and bake it for half an hour, and then here’s where things got really weird. You pour in another cup of cold milk, and stick it back into the oven and it bakes for 1 1/2 to 2 hours more, until it has turned into something that *isn’t* strangely molasses-scented soup.

We had friends over, who were all warned that they were going to be guinea pigs for this recipe (none of them had ever had it either), but thankfully they’re all the sort who are game for trying weird things. I kept checking it and checking it but the center never really seemed to set. When I pulled it out of the oven, finally, the top was browned, as per the recipe instructions, but the middle was still a bit on the soupy side, and I wasn’t really sure if it was ever going to change, since it had looked the same for the past half hour in the oven. 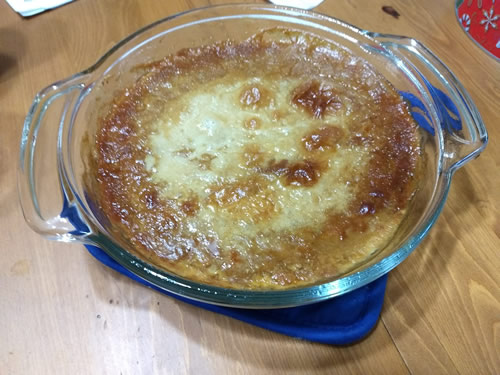 Nevertheless, we all gave it a try.

The flavor isn’t bad. The molasses comes through, which is good because I am a fan of molasses. But the texture is a bit like eating molasses-flavored polenta, except not necessarily in a good way. It was a bit gloopy. I began to wonder if maybe the recipe itself was the problem. 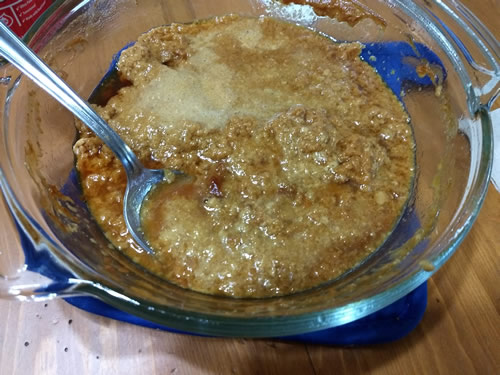 A quick Google search brought back lots of variations on the recipe, but in all of them, the ratio of cornmeal to liquid is roughly the same. In some it was clear that the pudding had cooked down to something more resembling a soft cake; in others, the pudding was a bit more on the ‘gloopy mess’ side of the equation, suggesting that I’m not the only one who’s had this same problem.

Let’s just say that I’m glad we’ve come a long way from the time when this was what people had to look forward to for dessert, and leave it at that.