Just don’t ask me to pronounce it

As noted earlier, for April’s #BakingSisters project, my sister and I did liege waffles, but since the bulk of the work for those was done the day before, we decided to also make Kvaefjordkake.

This is a Norwegian cake (the internets tells me it’s the Official Cake of Norway, although as I am not Norweigian, I can’t attest to that being the truth or not), and it’s comprised of layers of cake, meringue, and pastry cream. It is also a shockingly simple cake to make, for all its various components.

First you make the pastry cream. Here is where I admit that while my sister went the full from-scratch direction, I took advantage of the ‘cheater’ method espoused by King Arthur Flour (that link goes to their version of this cake) and made mine from a box of vanilla pudding and some heavy cream and the insides of a vanilla bean.

Once the pastry cream is chilling in the fridge, then you make the cake, which is nothing more than a very thin vanilla sponge. My sister made the King Arthur Flour version of this cake, so she spread hers into two round tins, while I dutifully followed the instructions in the version I was using, and spread mine out on a baking tray lined with parchment paper.

Then you make meringue, which is really nothing more than egg whites whipped until stiff, with sugar stirred in, and you spread that on top of the cake batter. 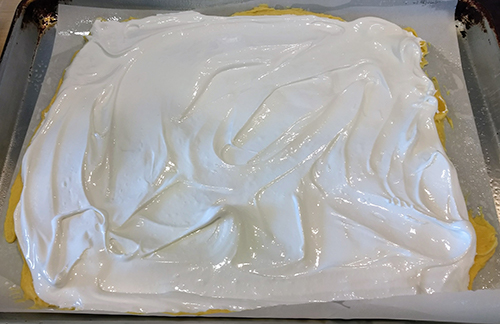 It looks a bit like it’s been topped with marshmallow fluff.

Then that gets sprinkled with cinnamon sugar and chopped almonds (or in the case of my sister, who is unfortunately allergic to nuts, feuilletine), and popped into the oven to bake until the meringue is dry and crispy on the outside. 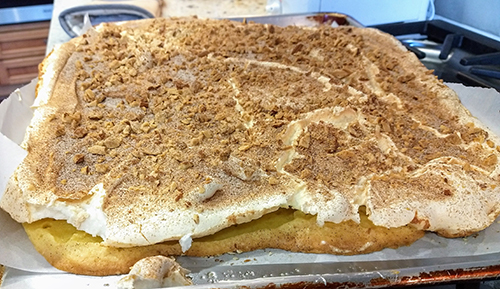 While that cooled, we took a short kitten break (or rather, I took the laptop into the foster room and held up both kitten and momma to the camera so my sister could see them). And then finally it was time to assemble.

For the sheet pan version, that meant just cutting the thing in half. For the round version, that required a little more effort in order to extricate the cakes from the tins. Luckily the fact that the meringue is topped with cinnamon sugar and almonds means it already looks a bit rustic, so if the meringue gets a little cracked or smooshed during the process, that’s okay.

For the final step, you spread one half with the pastry cream, and then top that with the second half. My sister added berries to hers, but as I do not like berries, I kept mine plain. I also followed a suggestion I found in the comments and put the bottom layer meringue-side down, so that the pastry cream was sandwiched between the cake layers, in order to help keep the meringue crisp. 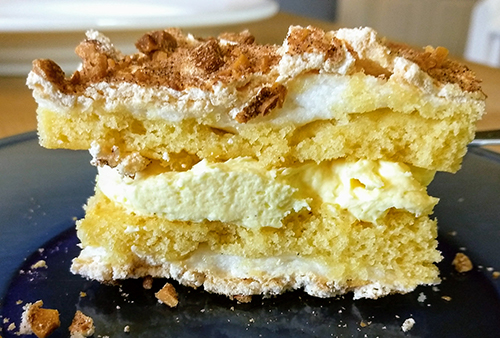 Verdict: This thing is incredibly delicious (and incredibly rich), and I can easily see why it’s earned the nickname of World’s Best Cake. The flavors of each layer are very delicate but they all work well together. The meringue provides a crisp, yet chewy texture and the almonds provide a much-needed crunch. Many yummy noises were made on both sides of the camera, from all four taste testers involved (both husbands eagerly took part in this). 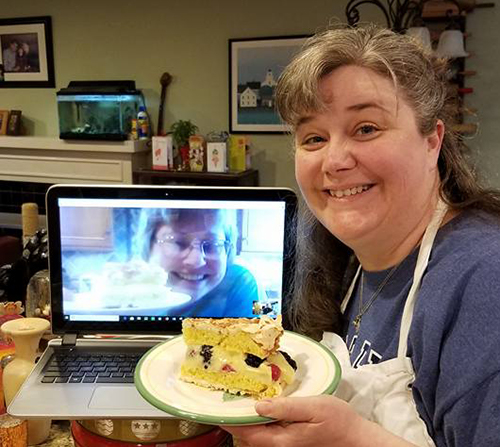 My sister’s looks so pretty with the berries!

I did not actually assemble the whole thing on the day of baking, because I really didn’t want to have that much cake sitting around, tempting us. So instead I only layered two small pieces for the initial tasting, and then carefully wrapped up the remaining pieces of cake for later. The rest was fully assembled and taken to a meeting a few days later, where it was devoured with much enthusiasm. I think it’s safe to say I’ll definitely be making this one again.