This month, for our #BakingSisters event, my sister suggested we do a Doughnut Day. I was immediately on board, because for one thing, doughnuts (!!), and also I’ve actually never deep-fried anything before (with one minor exception), so I figured this would be fun. Over the past few weeks we’ve both been poking around, looking for interesting recipes to try (because why do boring regular donuts when there’s so many other options out there?). For the purposes of this challenge, any fried dough counts as a doughnut, and we each made three fried varieties and one baked one, although not all of them were the same.

To kick things off, Friday night we each put together the dough for beignets, since it needs to chill at least overnight. And then this morning, before we even got together online, I made Peanut Butter Doughnuts for breakfast, because I was getting hungry. 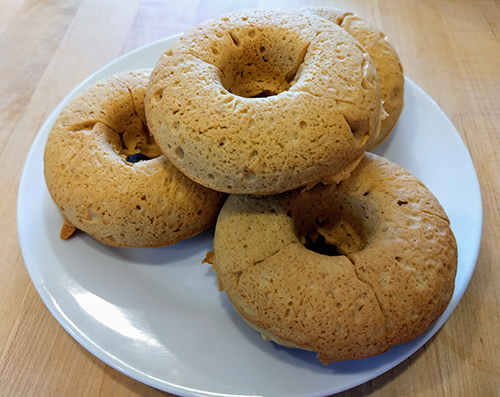 Technically I might have been cheating a bit, since I’ve made these doughnuts lots of times before – they’re one of the very few baked doughnut recipes I’ve tried that has the close texture and consistency of an real cake doughnut, instead of just being a muffin baked in a ring instead of a muffin tin, like the majority of the ‘baked doughnut’ recipes actually are. You can go through the hassle of making the chocolate glaze for these, if you really want, or you can just take the easy way out and smear them with Nutella prior to stuffing them into your face. 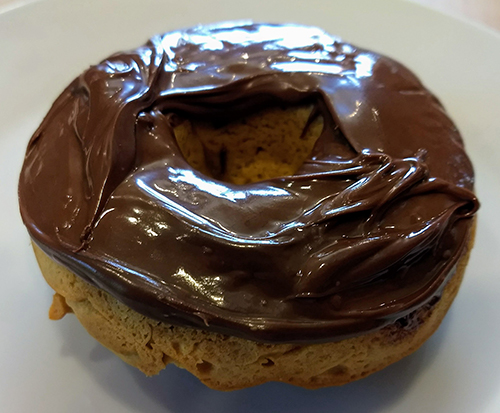 Once we connected via Google Hangouts, my sister immediately set to work making these Maple-Glazed Bacon Doughnuts, while I put together the dough for Koeksisters, which are a South African treat. I also got the oil started – first in my old Rival crockpot which technically could be used for frying (it even came with a fryer basket), but which never got up to temperature, so eventually I just dumped all the oil into a big pot on the oven and popped in my thermometer and hoped for the best.

Next, while my sister then put together the dough for Sopaipillas – a snack I remember my mom making back when we were kids – I rolled out my beignet dough and cut it into little 2-inch squares, and started dropping them into the oil to fry.

A quick digression. A couple years ago, for a Sisters Weekend, my sisters and I spent a couple days in an intensive baking class, where we made, among a plethora of other types of baked goods, beignets. They’re basically a brioche dough, fried and then rolled in vast quantities of powdered sugar. So technically I *have* deep-fried things before, except it was in someone else’s deep fryer gadget and i wasn’t responsible for tracking temperature of the oil and so on. Having never been to New Orleans, my memory of beignets is based solely on those, which were fluffy and soft and absolutely delightful.

These, however, weren’t quite the same. I’m not sure if it was because my oil was too hot (it was a royal pain trying to get it to stick to a consistent temperature), or if the dough was too dense, or some other factor, but while they were tasty enough, they didn’t in any way resemble the light, fluffy things we made in that class, lo those many years ago. Ah well. 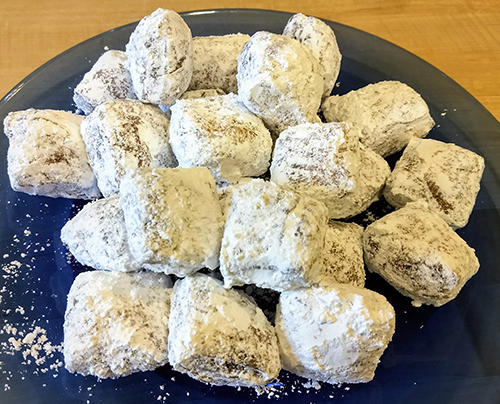 Powdered sugar can cover up all *kinds* of things, like the fact that some of them were probably a little overdone.

That done, it was time to return to the Koeksisters, now that the dough had rested enough. I rolled it out, then cut it into pieces and cut those into thin strips, which were then braided together. 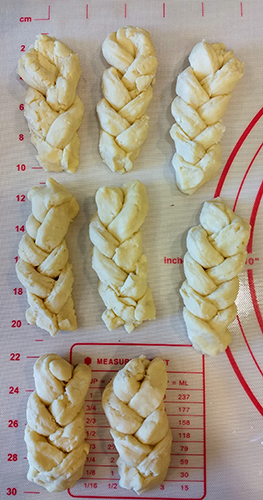 I took this picture after braiding them but before frying because I was worried they’d come apart in the oil.

Into the fryer they went. By this time I had gotten a better handle on maintaining the temperature, so these fried up a lovely golden brown, unlike with the beignets. Once out of the fryer, they got a quick few seconds to drain on some paper towels, before being immediately placed into a lightly spiced syrup. I actually made that earlier in the morning because it needed to cool completely prior to dropping in the hot doughnuts, and I was concerned it otherwise wouldn’t have enough time to chill.

A couple of the koeksisters fell apart in the syrup (all the better for taste-testing!), but most of them held together. I was pleased to see that braiding was still clearly visible after being fried. 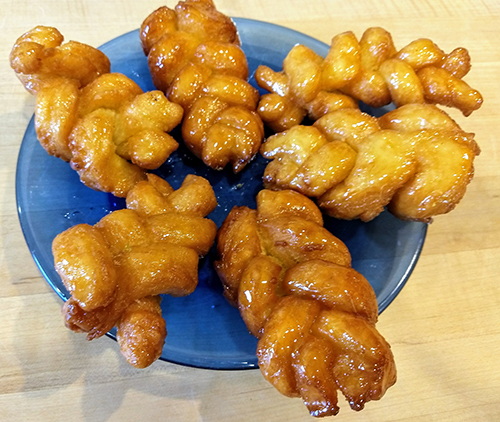 These are actually quite tasty. The spices didn’t come through – it’s possible I just didn’t use enough – but the dough is crunchy on the outside, yet soft in the middle, and the syrup adds a delightful sticky sweetness to the mix. I wondered about the fiddlyness of braiding the dough beforehand, except that I suspect doing this creates more nooks and crannies for the syrup to soak.

Finally, it was time to tackle the fourth recipe: Ponchiki. There are numerous variations out there for this doughnut, depending on if you want the Hungarian version (Turofank, which I made) or the Russian version (Ponchiki, which my sister made). In all the variations, the common denominator is the inclusion of cheese – either cottage cheese (which is what we used) or ricotta, or something similar. It’s just stirred directly into the batter when you make it, which sounds really odd, except that once it’s fried, you would seriously never guess it was there to begin with.

This was a much wetter dough than any of the others, more like fritter batter than something shaped. They rolled and bounced around a bit like angry puffer fish in the oil, and occasionally spewed out little blorps of dough here and there. And when you’re done you have a pile of strangely shaped little brown puffs. 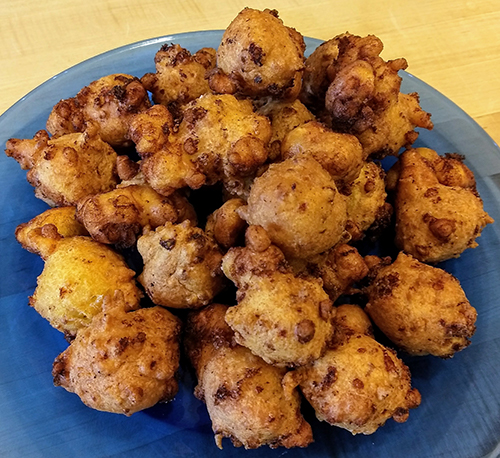 I know they don’t look like much in this picture, but, still warm from the fryer, they were delightfully light and airy, with just the faintest hint of sweetness. Alas, the version my sister made didn’t turn out as delicious for her; she said they were a bit stodgy and not at all interesting.

My sister and I with our various fried goodies. 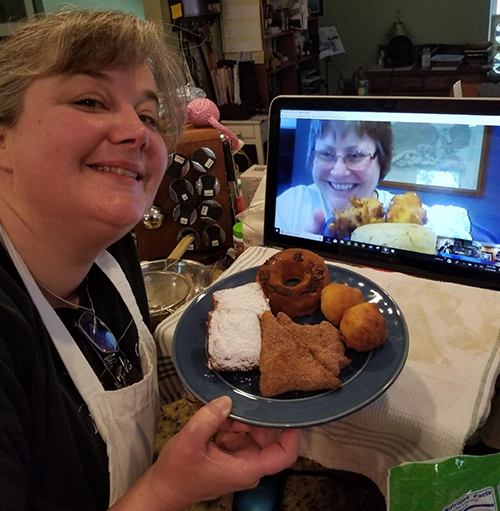 All in all, it was a fun morning, despite the mess of oil splatters all over my counter, and I got to try some new-to-me recipes. My favorite of the three new ones were the koeksisters and I’m pondering whether I could mimic the texture by baking the braids instead of frying them, prior to dipping them in the syrup. As for the beignets, I’ll leave those to New Orleans. It was fun to make them, but they were more trouble than they were worth, and, much like the Ponchiki, they were only good when fresh and warm, and they’re not the sort of thing that tastes good when reheated.

« Just don’t ask me to pronounce it
Tracking »

« Just don’t ask me to pronounce it
Tracking »