This morning we went into the kitten room and watched the once-sickly kitten racing around, eyes all wild, tail all puffed, acting just about like any other kitten his age would act. He now has, in fact, more energy than before the crash, which seems to confirm (at least for me) that this was just a relapse of whatever it was that took him down the first time. He’s not thrilled to still be getting medicine, but I don’t mind the occasional glare from a small floof – it’s not the first time and it certainly won’t be the last, and whether he likes it or not, he has to finish up these doses so we can make sure this thing is gone for good.

As for today’s citrus-related thing, I didn’t think about what to make all day, until after dinner when I remembered, oops, I hadn’t made any citrus things yet. So I hastily whipped up a batch of Lemon Ginger Shortbread, using some of the candied ginger I make and stash in the freezer for this sort of thing. 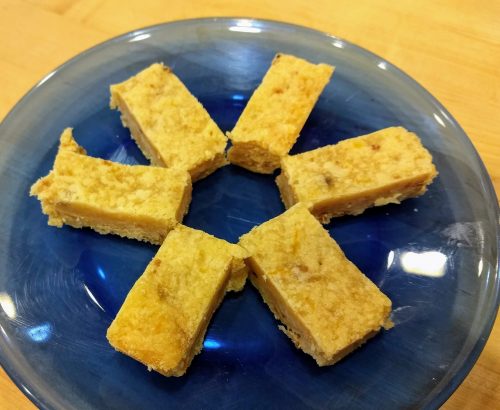 They don’t look like much, especially since we didn’t have any powdered sugar, so I couldn’t make the glaze, but they’re tasty. The lemon flavor is subtle, and you probably wouldn’t know there’s any ginger in there at all, except for the slight heat that follows at the end of a bite. It will be interesting to see if the ginger flavor gets a little more pronounced after they’ve had time to sit for a day or so.

« Frost in the air
Soup-adjacent »

« Frost in the air
Soup-adjacent »