When one thinks of orange, one naturally thinks of biscuits, right?

Yeah, me neither, but when I saw this recipe I knew I had to try it. So today’s orange thing was these Orange Biscuits.

They come together like any other biscuit recipe, in that you work all the dry ingredients together with the butter until it resembles coarse sand, and then you stir in the liquid (in this case milk and orange juice) until just moistened, being super careful not to overwork the dough, and then you roll them, cut them, and bake them.

These had an extra step of an orange butter sauce (which is literally orange juice mixed with melted butter, reduced on the stove) which was brushed on top of the biscuits prior to baking. Here’s where I admit I wasn’t paying enough attention to the steps so I popped the biscuits into the oven and then made the butter sauce instead of the other way around, so I pulled them out about five minutes from the end, basted them with the orange butter sauce, and finished them back in the oven.

Of course, once one has a small bowl of orange butter sauce, one has to come up with something to do with all the rest of it. So I looked at the pan of chicken and broccoli I was putting together for dinner, pondered the fact that orange would go nicely with both of those, and just dumped the remaining orange butter sauce directly into the pan. That, plus some leftover rice from the fridge, turned into a delicious dinner. Also, how many more times can I use the words ‘orange butter sauce’ in this blog post? 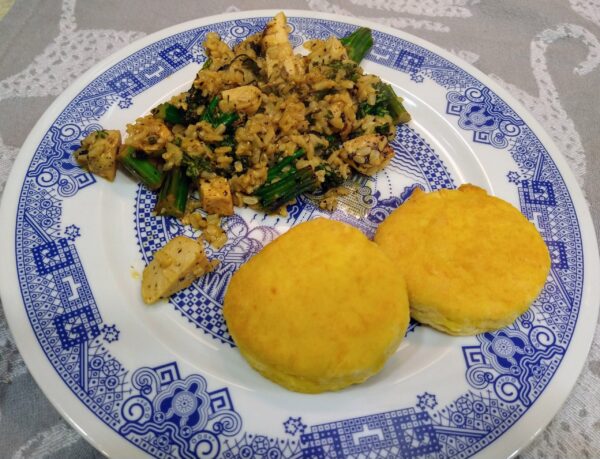 While I would happily use orange butter sauce for chicken, broccoli, and rice again, I’m not sure the biscuits are worth a repeat. They’re perfectly fine biscuits, but a plain, non-orange biscuit would have worked just as well.