This weekend Richard and I have been attending Boskone through the magic of the internet, since it went entirely virtual. This isn’t the first virtual convention we’ve done since the pandemic took over last year, and the way things are going, it certainly won’t be the last.

It’s a different experience, attending via computer versus being there in person. On the one hand, it’s sad to miss out on all the interactions with fellow SciFi/Fantasy fans, getting to see all the awesome costumes, chatting with fellow nerds in the halls, and so on. But I have to admit that virtual cons have one major bonus going for them that I am going to miss SO MUCH when we all can gather in person once again. Because all the attendees are automatically muted, that means that we all can focus on the presenters! There aren’t people holding conversations in the back of the room where they think no one can hear them (but we can, annoying people. WE CAN!).There isn’t any way for any of the audience members to interrupt with their ‘this isn’t really a question’ speeches. Any related (or unrelated) chatter happens silently, in the Chat box. Any questions being asked are visible to everyone present, so we’re not wondering what the heck the presenters are responding to when they answer someone with a quiet voice who only they can hear. It’s been so delightfully refreshing! Plus attending cons from home means I can sit in my pjs with cats and knitting and occasionally refill my coffee or go bake something on the break, and the food is significantly better than what’s usually available.

Well. Usually it is, unless you happen to be doing something like making an orange thing a day and you find what appears to be a promising recipe, except it fails to deliver on all counts. Sigh.

Today’s recipe was this Honey Orange Firecracker Shrimp. On paper it sounded really promising – a sweet and spicy sauce on top of breaded shrimp. How could this go wrong?

Well, for starters I had a bag of salad shrimp in the freezer instead of ‘regular sized’ shrimp, and I thought that would be fine, but when I added them to the pan, they all just kind of clumped into one giant blob.

I added some broccoli to the pan, and cooked that, but then I added the sauce, and things just went….gloopy. 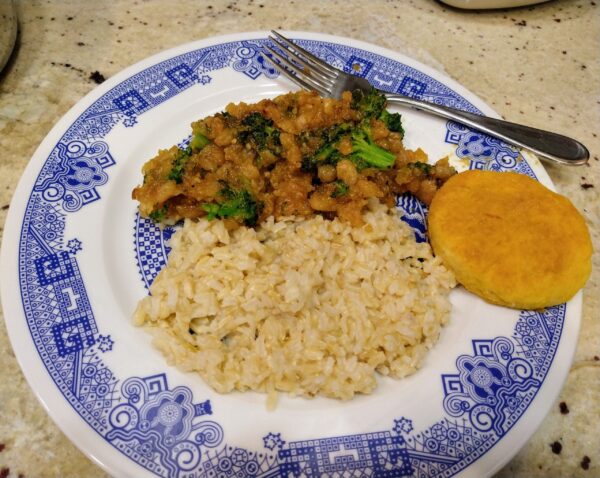 It might have been okay, except that it had almost no flavor. For something marked as ‘Firecracker’, I would have expected a bit of heat, but…nothing. No orange. No spice. Just…gloop. Gloop and rice.

Ah well, they can’t all be winners. Adding this one to the pile of nope and moving on.

« All the butter
Cheese, please »

« All the butter
Cheese, please »