This morning we woke up with one goal in mind – buy a car without leaving the house. After polling a bunch of friends yesterday evening, and checking reviews online, I determined that buying a car via the internet would be an excellent way of avoiding the hell of in-person car dealerships. So after we did the usual round of litter box cleaning and cat / kitten snuggling, we got online and started searching. We decided since we’re both working from home, we really only need one car right now, plus since we like the Priuses we’ve had, and we’re familiar with how they drive and function, we’d just get another one. A couple hours later and the first steps of the process was complete. A new-to-us 2017 Prius is on its way to the CarMax near us, and we didn’t have to actually leave the house. Hooray!

In celebration, I made Panna Cotta with Orange Jelly. This is the sort of thing I’ve seen on various British baking shows but never actually tried. It turns out panna cotta is super simple to put together – it’s just milk, cream, vanilla, and some gelatin – and the orange jelly was also super simple – literally just orange juice and gelatin. It took a couple hours, only because the panna cotta layer had to set enough that when I poured the jelly on the top it wouldn’t melt the layer below. 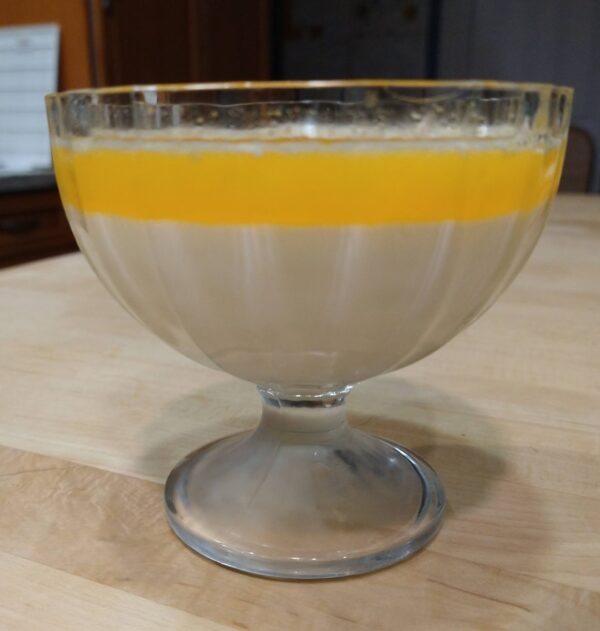 It turned out quite pretty, although I wasn’t entirely successful in not melting the bottom layer – there were tiny bits of panna cotta that floated to the top – but overall I’m quite pleased with it. It was also pretty tasty – although I think I preferred the panna cotta by itself – the orange jelly was almost a bit too strong on the orange flavor and it tended to overpower the more delicate flavor of the bottom layer. I probably won’t ever make this exact recipe again, but I would definitely do panna cotta again, perhaps with a different flavoring stirred directly into the cream.

« Two and done
Citrus and sugar »

« Two and done
Citrus and sugar »